The urban environment is alive with hidden currents of electromagnetic signals.

Streams of wireless data surge from internet exchanges and cellphone relays, flowing from routers to our devices and back again. This saturation of data has become a ubiquitous part of modern life, yet it is completely invisible to us. What would it mean to develop an additional sense which makes us continuously attuned to the invisible data topographies that pervade the city streets?

Phantom Terrains is an experimental platform which aims to answer this question by translating the characteristics of wireless networks into sound. By streaming this signal to a pair of hearing aids, the listener is able to hear the changing landscapes of data that surround them. Network identifiers, data rates and encryption modes are translated into sonic parameters, with familiar networks becoming recognizable by their auditory representations.

The project challenges the notion of assistive hearing technology as a prosthetic, re-imagining it as an enhancement that can surpass the ability of normal human hearing. By using an audio interface to communicate data feeds rather than a visual one, Phantom Terrains explores hearing as a platform for augmented reality that can immerse us in continuous, dynamic streams of data.

Phantom Terrains is a prototype platform developed over a 6-month period using research funding from Nesta, the UK's National Endowment for Science, Technology and the Arts, and Starkey Hearing's innovative Bluetooth-connected Halo hearing aids. It is an experimental foray into the concept of sound as a ubiquitous user interface, exploring novel ways in which information can be communicated through an always-on platform. We believe that such components will be core elements of personal computing in the future.

The map below visualises the wireless network landscape on a walk around BBC Broadcasting House. Stronger network signals are shown as wider shapes; the colour of each shape corresponds to the router's broadcast channel (with white denoting modern 5Ghz routers), and the fill pattern denotes the network's security mode. 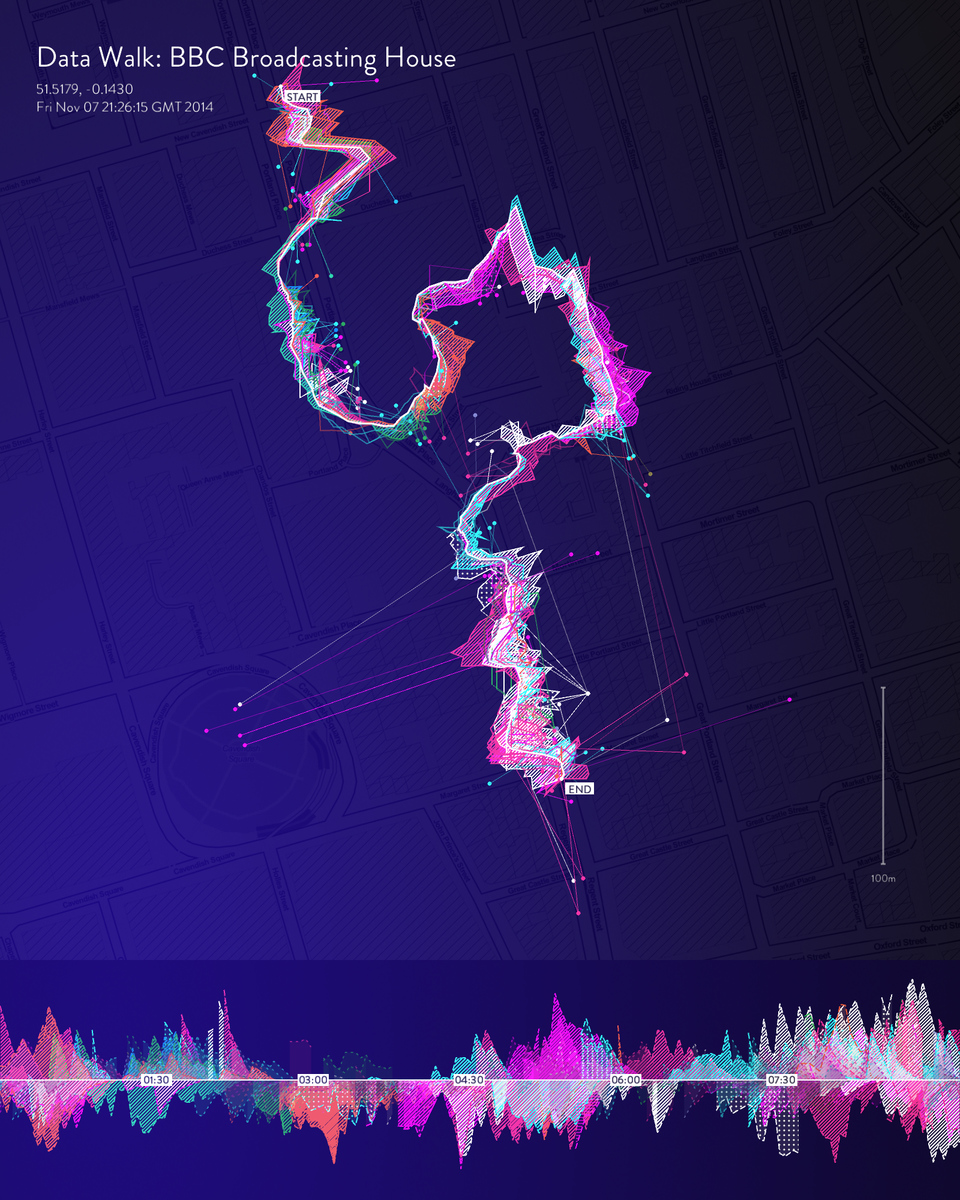 Beneath the map is an audio recording of part of the same walk, as heard through the Phantom Terrains sonification interface. The sound of each network is heard originating from the router's geographical location, producing clicks whose frequency rises with the signal strength — akin to a layered series of Geiger counters. Routers with particularly strong signals "sing" their network name (SSID), with pitch corresponding to the broadcast channel, and a lower sound denoting the network's security mode.

His work has been published by the BBC, Times, Guardian, Wired, New Scientist, Mosaic, Slate, and others; and by broadcasters including BBC Radio 4 and Bravo. He has progressive hearing loss and is reliant upon assistive hearing technology.

Daniel Jones is an artist and software engineer whose work explores new ways in which sound and technology can illuminate our understanding of the world. This manifests itself in both scientific and artistic output: he has published work on process composition, creativity theory, systems ecology and artificial life, and exhibits his sound work internationally, harnessing algorithmic processes to create self-generating artworks.

Recent works include Living Symphonies (with James Bulley, 2014), a landscape sound work that grows in the same way as a forest ecosystem; Global Breakfast Radio (with Seb Emina, 2014), an autonomous radio station that broadcasts live radio from wherever the sun is rising; Radio Reconstructions (with James Bulley, 2012), which uses indeterminate radio broadcasts to create a live composition; and The Listening Machine (with Peter Gregson, 2012), a 6-month-long online work that translates social network dynamics into a piece of orchestral music.

To discuss Phantom Terrains, please contact the team via email:
info (at) phantomterrains.com.

Phantom Terrains' data visualisations and visual identity were designed by Stefanie Posavec, whose data-related design work ranges from data visualization and information design to commissioned data art for a variety of clients. Her personal work has been exhibited internationally at major galleries including at the Museum of Modern Art (New York), Centro Cultural Banco Do Brasil (Rio de Janeiro), and the Victoria & Albert Museum.

Many thanks to our sponsors for their generous support in the realisation of Phantom Terrains.